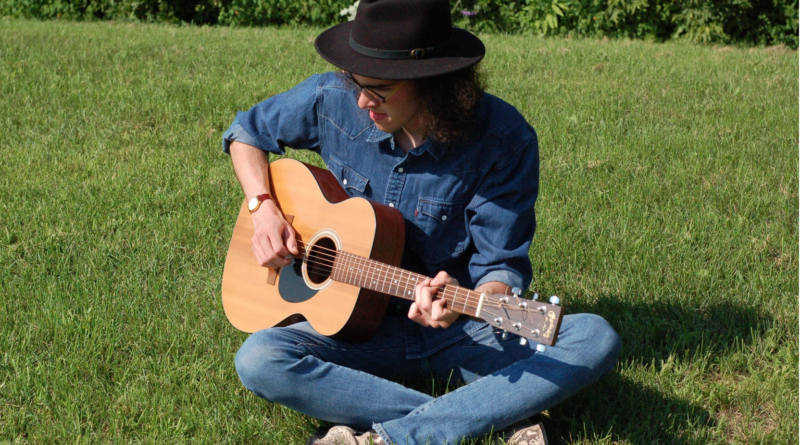 We first met Jacob at one of the initial Be in the Band sessions in Wakefield, Quebec. For his age, Jacob already had some good moves on the guitar and from his previous incarnation as a drummer, his rhythm was solid. As we have seen from previous BITB alumni, the ability to meet other musicians his age in a fairly rural situation was paramount to his development as a player.

“It was so great, like, there’s probably not a better thing for young musicians to do. I come from a small town just a little north of Wakefield called Val De Monts, and I got to play with so many musicians from Ottawa, Hull, and made many long lasting connections, people who I still play with today. I got to play with Mia Kelly (another BITB Alumni) when she did her EP release at the Blacksheep and we did a gig in Toronto and at her own Bluesfest gig. It’s been a great time so far”.

Through the festival experience, Jacob also got the chance to see some of his influences perform at the festival, among them, Tom Petty. It was one of the last shows that Tom did before passing away later that year. “My biggest influence is Bob Dylan, but Tom Petty is a close second. When I got a chance to see him that night, it was like a kind of a spiritual experience, to see the swagger those guys had on stage and the sound they had, it was like nothing else and it had a huge impact on me”

As far as guitar influences go, Jacob offers up a couple interesting but stylistically polar opposite names. “I started playing guitar because I really wanted to write songs. That said, I remember that I was sitting with my grandfather on the porch one sunny summer afternoon, and my uncle pulled up with an album/CD of Albert King, and he put it on and I just thought I had never heard something so cool! So definitely the blues got me going but then I was super impressed with Joni Mitchell and the arrangements she did in terms of songwriting”.

With the Be in the Band program, participants rehearse for 10-12 weeks in preparation for a show in the community, followed by a performance spot at RBC Bluesfest. In Wakefield, participants also get an opportunity to perform at the outdoor Canada Day celebration. “Ya, that process was amazing, with the show at the Blacksheep with all its character, then Canada Day playing to more people, and finally at Bluesfest on what felt like a massive stage, sparkling new equipment and beautiful amps. It shaped me, for sure, into who I am today”.

Jacob has been honing his songwriting skills and recently did a session with legendary Canadian songwriter Ian Tamblyn as part of CityFolk’s ‘What’s in the Song‘ community music program. Ian actually lent him his twelve string when he went off on tour. He has been using the time at home during the various lockdowns to write and define his style, finally just releasing an album of 10 songs for 2021 called ‘I’ll be Waiting Here‘. Jacob is also participating in CBC’s Searchlight for unsigned artists over here : CBC Searchlight. Check it out and vote!!

Learn more about Jacob over here https://www.jacobrivermilnes.com/
Click here to listen to the album ‘I’ll Be Waiting’.